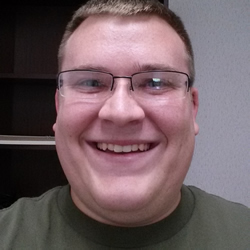 Jason Szost has been a Questeq Team Member and Level 2 Desktop Engineer at Peters Township School District for over 4 years. He is currently responsible for maintaining over 850 Windows and 50 Apple computers at the high school. On a daily basis Jason resolves help desk tickets and educates staff on the computer error(s) they may be receiving to prevent similar problems in the future. In addition, he assists staff on using technology in the classroom. Jason adds, “As Francis Bacon famously stated, “Knowledge is Power”, and I try to implement that in my everyday tasks.”

Recently Peters Township High School students were chosen to be the first class to participate in a Skype video conference with scientists from CERN, the European Organization for Nuclear Research and Fermilab, a particle physics laboratory in Batavia, IL. Much planning and testing by the PTSD IT Team contributed to the success of the event. Jason recalls, “I am proud to report that the call came through crystal clear. I cannot take credit for it alone, several members of the tech department assisted in making sure everything went as planned. We have a great team here at PTSD and I wouldn’t have it any other way.”

Regarding current educational technology trends, Jason feels that BYOD (Bring Your Own Device) and one-to-one computers/tablets for the students continues to be a big focus for K-12. Peters Township High School recently introduced BYOD during the 2012-2013 school year. Jason notes, “Now that technology is becoming more affordable, schools are not holding back. They are experimenting with new technology in an effort to deliver curriculum in a more effective way.”

Jason holds an Associates Degree in Information Technology with a concentration in Network Administration from the Pittsburgh Technical Institute.

Jessica Azur, HR Manager for Questeq shares, “Jason started with Questeq as a Level-1 Desktop Engineer and has grown to become an important lead to the team in place at Peters Twp. He continues to be a great asset to both Questeq and Peters Twp. School District.”